Park near Dillard's
Get Directions

Inspired by creative spirit, Volcom was founded in 1991 and creates products for the persistent who are true to their passions. We were born to chase what we are true to. It’s not that we want to... WE HAVE TO. We have a vision that turns obstacles into opportunity, a creative courage to tempt the impossible... And embrace the strange.

Telling us to push further…To try again. Endlessly seeking elevation, we are all connected by this same internal force. Forever we chase that intoxicating moment when our vision is realized... The world around us goes quiet... And for brief moments, we are more than alive. Volcom, True To This.

During the March dumps of 1991, Richard Woolcott and Tucker Hall, set off on a snowboard trip that would forever change their lives. Tucker had just been laid off from work but that wouldn’t stop him from attending his routine Tahoe trip to visit Nathan Fletcher and Mark Gabriel. After riding four days of fresh powder, Richard called work with the excuse that they were snowed in and extended his stay. For more than a week, they awoke every morning with two new feet of snow. It was their first real experience riding powder and the new obsession wouldn't stop there.

Two weeks later Richard quit his job to take some time off and snowboard. He and Tucker had also talked of starting a clothing company during the Tahoe trip but nothing was really finalized. Later that spring, the two came up with the idea of starting a riding company based around the three sports they enjoyed (snowboarding, skateboarding and surfing). With an initial $5,000 from Richard's dad, they started the process. First came the name, then came the stone and Volcom was born.

The Volcom idea would incorporate a major philosophy of the times, "Youth Against Establishment". This energy was an enlightened state to support young creative thinking. Volcom was a family of people not willing to accept the suppression of the established ways. This was a time when snowboarding and skateboarding was looked down upon and the U.S. was in a recession with riots in LA and the Gulf War breaking out. Change was in the air.

For the first two years, Richard and Tucker traveled around the world on wild journeys with friends riding whatever they could. The business side of things was minimal. The headquarters were set up in Newport Beach in Richard's bedroom and all sales were run out of tucker's bedroom in Huntington Beach. The two knew nothing about how to make clothes but that didn't matter. It was all about spirit and creativity. Clothing sales for the first year were $2,600.

Since those wild beginnings, the Volcom Stone has spread slowly across the world. The company has matured internally but continues to run off the same philosophy it started with. The Volcom thinking now flows through its art, music, films, athletes and clothing. 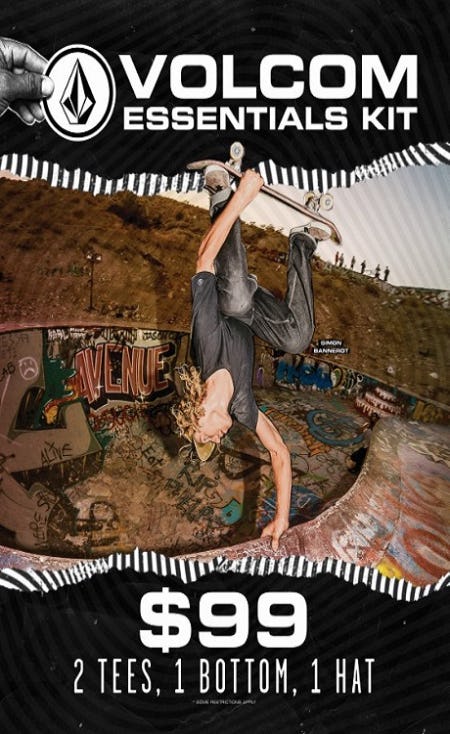